Stories Of A Dish

A global pandemic may have struck, but we have a person who’s just stuck! He wants to win the world over with his cooking, but will he be able to learn how to? He’s got to face isolation, earn acceptance and most importantly, get groceries delivered! Will he find the secret recipe to happiness? A culinary theatrical journey awaits.

Name of the Group : Nautanki Bazaar

Written and Performed by Himanshu Sitlani

Nautanki Bazaar is newly formed collective by Neha Poduval and Himanshu Sitlani in Toronto, Canada with a mandate that focuses on South Asian Artists and Arts.

Their debut production “An IMM-Permanent’ Resident” was scheduled to open at The Theatre Centre in Toronto in April 2020, but has been on hold due to COVID-19. Their first digital play ‘Stories of a Dish’ was presented at the Mississauga and Edinburgh Fringe Festivals in August 2021.

Himanshu Sitlani is a thespian, originally hailing from Mumbai. Foraying his way into theatre as an actor, he progressed on to other creative aspects and worked as a Stage Manager and Producer over the years with QTP and Akvarious. He co-founded Le Chayim Theatre Productions in Mumbai in 2006 where he eventually made his directorial debut in 2013.

Since immigrating to Toronto Canada, Himanshu’s been immersed in supporting the creative arts, working as Patron Services Manager at Factory Theatre, while penning down his ideas towards his goal of creating a bridge between creative artists in Canada and India. In 2019, he co-founded Nautanki Bazaar with his wife. 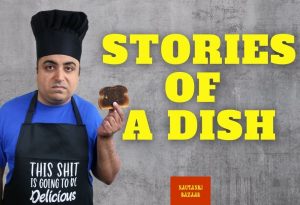